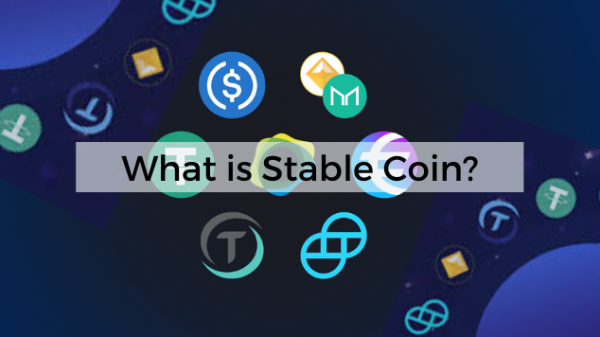 What is Stablecoin and How is it Different from Existing Cryptocurrencies?

What is a Stablecoin?

Stablecoins are digital currencies encrypted with Cryptographic techniques. They are backed by the fiat currencies or other assets so that it becomes stable and not volatile like the other Cryptocurrencies.

Stablecoin is the new lot in the list of Cryptocurrencies. But apart from being just another Crypto token, what do these Stablecoins have to offer! There are a couple of things that make the Stablecoin slightly different from its peers.

We will be discussing all those topics in this blog here.

Stablecoin: The new kid on the Block!

It’s through the procedure of tying up the Stablecoins with fiat currencies (like US Dollars, Euros etc.), commodities, or a price-stabilising algorithm. This volatile nature can be eliminated to a greater extent.
So the major advantages that Stablecoins do offer are price stability, privacy, decentralized nature, scalability, and redeemability.

To get a better understanding let us deal with the taxonomy of Stablecoins below. 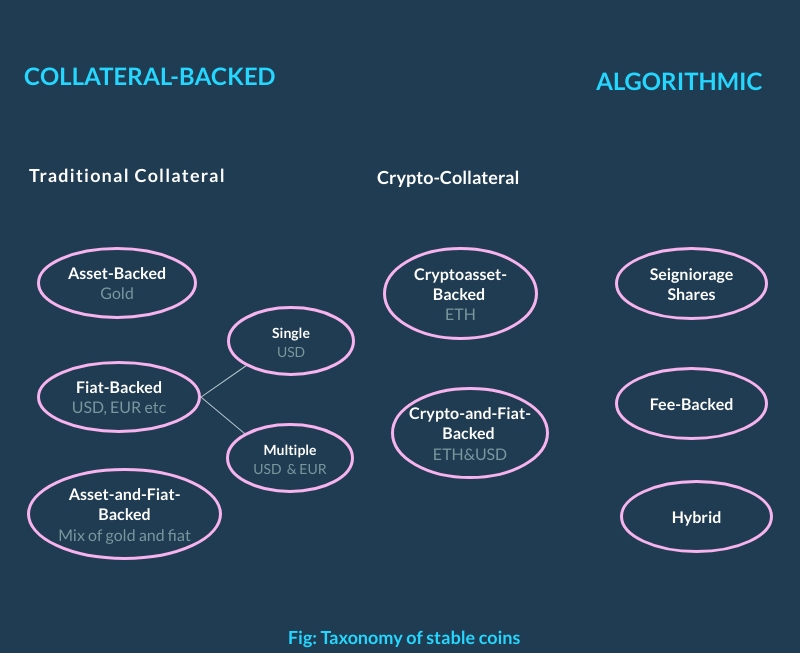 Stablecoin can be mainly categorized into three types. They are as follows:

Fiat-collateralized stablecoins are linked to an existing paper currency like US Dollars, Euros, etc. The company that issues the Stablecoins will hold the assets in a bank account. It’s the same format as the paper currencies which are supported by the Gold.

Read the blog on new trends in Cryptocurrency

A price-stabilization algorithm backs Non-collateralized Stablecoins. An example of the Cryptocurrency under this category is Basis. One of the major disadvantages of this category of Stablecoin is user adoption. If there are not enough users, then the stability of the entire system will be affected.

Why is Stablecoins important?

The real potential of Stablecoins is far beyond our ordinary imagination. It is expected to conquer the entire financial market of the world, which is assumed to be about 90 Trillion US Dollars! Hence Stablecoins are called sometimes the ‘holy grail of the world of digital currencies.

Stablecoins are expected to bring stability, safety, and security to the world of financial transactions. Well, what does one need more?

A look into the Future of Cryptocurrency

Some of the major possibilities of Stablecoins are as follows:

There are a couple of use cases for Stablecoins in the present world. They have been successfully implemented with mobile app payments, alternative currencies in emerging markets, and global payment systems. We will now see some of the real-world scenarios.

Facebook has launched its Whatsapp Stablecoin with India as primary target location. It is expected to give some tough competition for the Telegram. Facebook do have almost 200 million users in their kitty and receives a revenue of over $69 Billion in remittances. It thus creates an ecosystem where users can transact between the traders without the intervention of any third parties including banks or other financial institutions.

Reserve is another form of Stablecoin which is expected to solve the issues like inflation. There are many countries which do have a lower currency value when compared to the developed countries. One of them includes Venezuela. In this South American country, it was reported that they suffered inflation of 2 million percent in the year 2018 alone. This is something really serious and has to be addressed soon.

According to the functioning of Reserve Stablecoin, they use a hybrid system. That is, they implement an automated exchange-rate peg between the Cryptocoin Reserve and
Fiat currencies (like US Dollars and Euros) through a technology called Vault. Reserve is backed by Coinbase, Peter Thiel, and Sam Altman.

JPM Coin was introduced by the famous American multinational investment bank and financial services JP Morgan Chase in the year 2017. The CEO of the same company, Jamie Dimon always believed Bitcoin is a fraud and hence he introduced the JPM Coin. JP Morgan Chase has an overall turnover of more than 6 Trillion US Dollars a year.

Such movements by the financial giants are expected to provide a green signal to the whole financial market. But, they do have a negative impact as well. The major portion of the money will be controlled by the large and corporate giants without providing equal opportunities for all.

From the term ‘Stablecoin’ itself, one can guess the advantages that they provide when compared to the other forms of Cryptocurrencies. Stablecoins are more ‘stable’, and not volatile as the normal Crypto tokens or coins. They are made stable through certain procedures by linking it with the fiat currencies and more.

Stablecoins are expected to become the future of the Crypto world. But before, certain issues like scalability, price-fixing and other minor issues need to be sorted out. Hopefully, it will in the near future.