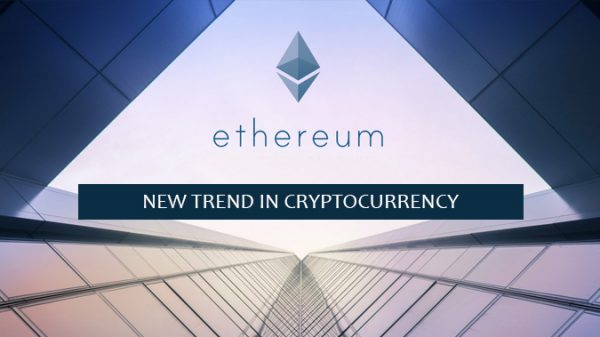 Ethereum Cryptocurrency is a decentralized application like Bitcoin. Through this, you can pay things online, trade money and also buy and sell anywhere that accepts it. While compared this with the bitcoin, it has more features like Ethereum uses cryptocurrency called “ether” which runs on “Smart contract”. Smart contract uses Blockchain technology and allows it to be traded if certain conditions met. Bitcoin runs on the blockchain too but doesn’t involve the extra step of smart contract.

Blockchain technology has many other applications that go way beyond digital currencies. In fact, Bitcoin is only one of several applications that use blockchain technology today. Until almost recently, constructing blockchain applications has required a complex knowledge in coding, cryptography, mathematics as well as important resources. But nowadays it has changed. By allowing developers with the tools to build decentralized applications, Ethereum is making all things possible. Ethereum blockchain integrated service are offered nowadays by Microsoft and ConsenSys partnering together so that the developers and enterprise clients can have a single click cloud-based blockchain developer environment. Initially, they offer two tools that allow for rapid cryptocurrency development of Smart Contract based applications

Well..! an adequate number of people still get confused about what’s need of bitcoin alternative for transfer of payments like Ethereum. The blockchain is a dominant technology and it is true that we have not fully utilized it to its level. Bitcoin only makes use of one of the many likely applications of the Blockchain technology i.e. peer-to-peer transfer of funds. It has a few advantages over Bitcoin such as the feature of coding Smart Contracts and the Ethereum Virtual Machine(EVM).

Is Ethereum alike Bitcoin? Well, sort of, but not really.

Similar to Bitcoin, Ethereum is a distributed public blockchain network. Although there are some significant technical differences between the two, the most important difference to note is that Bitcoin and Ethereum vary substantially in scope and capability. Bitcoin offers one distinct application of blockchain technology, a peer to peer electronic cash system that helps online Bitcoin payments. While the bitcoin blockchain is to determine the proprietorship of bitcoins, the Ethereum blockchain concentrates on running the programming code of any decentralized app.In the Ethereum blockchain, instead of mining for bitcoin, miners work to earn Ether, a type of crypto token that strengthens the network. In addition to tradeable cryptocurrency, It is also used to pay the transactional fees and computational services on the Ethereum network. The new trend in cryptocurrency makes possible ways for Ethereum beneficial.

What can Ethereum do that Bitcoin can’t?

Ethereum cryptocurrency is like Bitcoin with a few extra features.

Smart contracts are applications with a state saved in the blockchain. They can promote, verify, or enforce the negotiation or performance of a contract.

2# Ethereum has their own Turing complete internal code… a Turing-complete code means that it has given enough computing power and enough time… anything can be calculated. With Bitcoin, it has not that much flexibility

What can Ethereum be used for?

Because decentralized applications run on the blockchain, they make use of all its resources.

What’s the downside of decentralized applications?

Despite bringing a number of benefits, decentralized applications aren’t impeccable. Because smart contract code is written by humans, smart contracts are only as reliable as the people who write them. Code bugs or failures can lead to unintended adverse actions being taken. If a mistake in the code gets utilized, there is no efficient way in which an attack or exploitation can be stopped other than obtaining a network.

What is Stablecoin and How is it Different from Existing Cryptocurrencies?